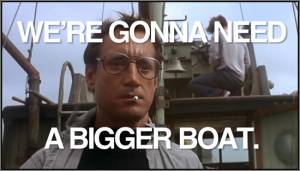 Have you ever found yourself in the midst of some large undertaking, realizing that you are woefully underequipped for the situation?

Have you ever come to realize that ​you're gonna need a bigger boat?

When inspiration strikes, or a deadline looms, build environments are usually not at the top of your priority list. But anyone who ever worked with a well fleshed-out environment will tell you how comfortable and enabling that is.

JAWS is a suggestion, a configuration base that you might fork as starting point for a software project of yours, then adapt to your own needs. While primarily aimed at C++, it also supports C or Java sources, and should be easily adaptable to many other programming languages.

It is based on the ​CMake build system, and includes preconfigured setups for many popular and useful tools and libraries, like ​ Boost, ​Valgrind, ​ ICU, ​ Doxygen, ​ Javadoc, ​AStyle, and LaTeX, as well as a couple of little tools and snippets added by the author of JAWS.

All code is provided under ​Creative Commons CC0 (Public Domain Dedication) unless otherwise stated in the source. See ​COPYING.txt for details.

As you are fully expected to modify JAWS to your specific requirements, JAWS itself is not “versioned”. Instead, you are urged to use the latest source snapshot, which is available via anonymous SVN or from GitHub, and possibly merge new additions into your setup as required.

Note: The SVN repository was migrated 2020-12-28. You will need to svn relocate your working copy.

WARNING: As of now, git will wipe any local changes not yet pushed. While borderline acceptable for Nightly and Continuous builds, this is a weapon of mass source destruction for Experimental builds. I will fix this, ​ soon hopefully, but for now tread carefully.

CMake has evolved, and some of the approaches in JAWS are now considered obsolete. And unfortunately, due to a work transfer I no longer use JAWS-based builds 9-to-5, so I have little opportunity to actually experiment with and test the setup. It is provided as-is, with no promises on further updates.